I cannot connect with this motherboard. I have tried disabling IPv6, using wifi rather than LAN, and using a different rig with the same cable.

I contacted support and was told; “unfortunately our system does not yet have drivers for this adapter
most likely they have not been released for Linux yet”

I found this so was not quite sure what he meant.

Does anyone know if I can install the following “drivers” in HiveOS manually?

Update: Trying the process outlined here with the I225-V drivers.
Will update with results soon.

1. Download driver from
https://downloadcenter.intel.com/download/15817/Intel-Network-Adapter-Driver-for-PCI-E-Gigabit-Network-Connections-under-Linux-?product=71307 (Testet on version 3.4.0.2)
2. Unpack zip to folder of your choice
3. Change to the driver src directory,
e.g. cd e1000e-3.4.2.1/src/
4. Make sure that any older e1000e drivers are removed from the kernel before loading the new module sudo rmmod e1000e
5. Compile the driver module: sudo make install
6. Load the module using the modprobe command: sudo modprobe e1000e The binary will be installed as: /lib/modules//updates/drivers/net/ethernet/intel/e1000e/e1000e.ko
7. Verify that the interface works. Enter the following, where IP_address is the IP address for another machine on the same subnet as the interface that is being tested: ping
8. Make the driver persistent sudo dpkg-reconfigure linux-image-$(uname -r)

I think this is what pkt 8 does::… Note: For certain distributions like (but not limited to) RedHat Enterprise Linux 7 and Ubuntu, once the driver is installed the initrd/initramfs file may need to be updated to prevent the OS loading old versions of the e1000e driver. For Ubuntu: # update-initramfs -u

Does anyone have an update to this?? I tried your suggested and still no luck. Completely intermittent ping drops… pulling my hear out trying to make this eth stay up! Just got MSI Tomahawk B460 , has this controller and does not work on latest HIVE Build.Thanks

I was pulling my hair out as well. I just ended up buying a cheap USB to Ethernet adapter and hardwiring with that.
It works flawlessly.

I used an old usb ethernet that was running on my WII and it work lol but i want to have the internal cart working. I have found this and will try the beta version of Hive that have support for newer card… I will test that out…

I have found the info here: 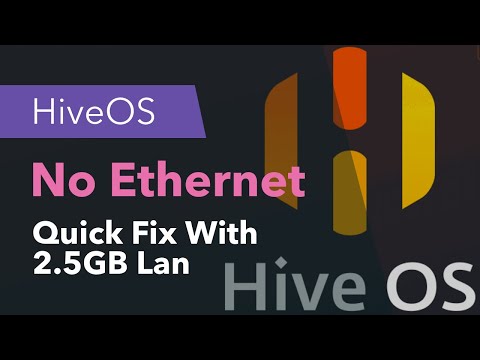 Thanks all for the info. Yes It looks like 5.10 kernel is the only way to get these drivers working…

I will try it probably tonight to, I hope it work ! I dont like to rely on usb and old device in my case lol